I forgot my coat. It’s something you don’t think you’ll need often in L.A., even in January, but it was a particularly cold Monday. Of course in L.A. you also don’t expect you’ll be watching a string quartet in the expanded picture window of an Alvarado storefront just north of Sunset Blvd open to the street with midday traffic rushing by. But we’re Angelenos, and we roll with it. Where I had rolled earlier this week was the heart of Los Angeles’ latest, greatest blossoming modern, art music scene. In the last few years, an expanding network of artists and musicians with ties not only through CalArts but through the ethereal world of Twitter and other social media have been making increasingly important music, and doing it their own way, on their own terms. And on this particularly cold January day, they were making it that way in Echo Park. 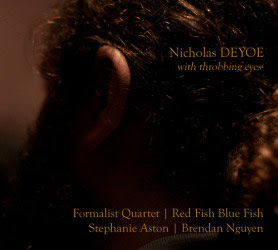 The occasion was the launch of the first release from L.A.’s newest record label, populist records. (A superbly ironic name for a contemporary art music outfit.) The label is the brain child of internet-savvy violinist Andrew Tholl and violist Andrew McIntosh who explained that they had created the label as an outlet for Southern California composers to get their work recorded by a home-grown label while providing local artists a chance to perform music they wanted to play. The first recording Nicholas Deyoe – with throbbing eyes provides a survey of Deyoe's work for small ensembles including songs written for soprano Stephanie Aston and two string quartets played by the formalist quartet - Tholl and McIntosh’s quartet alongside violinist Mark Menzies and cellist Ashley Walters. In March, populist will release McIntosh’s recording of solo works from American minimalist composer Tom Johnson. (The sample below features the formalists playing Deyoe's Images from a sleepless night from the new release.)

And while self-publishing music isn’t new, populist records represent a further step in the development of a musical and artistic community in Los Angeles that is beginning to command attention for its breadth, excitement, and sheer energy of production and performance. The launch event was held at Machine Project, a Los Angeles arts collective in Echo Park that hosts and promotes a wide variety of events. Machine Project has worked closely for several years with sound artist/composer/trumpeter Chris Kallmyer who in turn, along with McIntosh, Tholl, and others, performs as part of L.A.’s new music chamber orchestra, wild Up. Kallmyer, whose own work has been seen at the Getty Museum and other major art institutions, helped arrange the event at Machine Project where cupcakes and beer were paired with performances from the formalists as well as Deyoe’s solo pieces for cello. Deyoe himself played electric guitar augmented with an empty aluminum can, a favorite implement in recent guitar-based compositions. The crowd gathered at the front of the space and on the street looking into the store like displaced shoppers in an arctic L.A. mall. 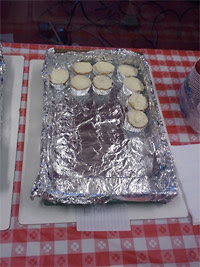 The sense of possibility was palpable as Tholl and McIntosh spoke of future plans for recordings from wild Up and other outfits in the area while the crowd filled with other familiar faces from the local art music scene, knit more closely together through an active online community. Composer Isaac Schankler, whose People Inside Electronics will produce their latest show on Feb 11 funded in part from an indiegogo campaign, was in attendance. Schankler is curating another evening at Machine Project on Jan 29, "Bandwagon! (a combine)", with all sorts of machines, musical and otherwise. All of this, of course, took place just two days after the last wild Up performance in Pasadena last weekend where artistic director Christopher Rountree helped put the final touches on wild Up's Kickstarter project to fund and press vinyl copies of their performance of the Shostakovich Chamber Symphony. The group has already surpassed its fundraising goal and is discussing plans to make a recording of last weekend’s concert available. To boot, Rountree will make an appearance on APM's Performance Today on the 19th to talk about the project. And the performance schedule of both wild Up and the formalist quartet is filled with appearances over the next several months, which, if their track record to date is any indication, will be superlative events.

Increasingly, and egged on by an active online community that has created connections in ways that may not have existed before, there is a new and expanding community of young musicians and composers across the city making exciting music they want to hear and play. The folks I've discussed here aren't the only ones, but they are creating a music scene in a way and with technology that hadn't existed before. They are intent on producing their own sounds in collaboration with one another without waiting for someone to come and discover them. And that is a great day for new music in L.A. Even if it happens in the most unusual spaces, on the most unusually cold days in our typically sunny, warm city.