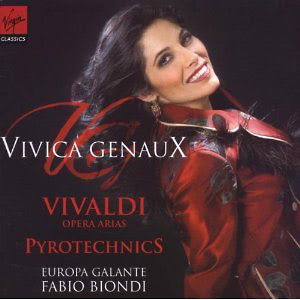 Amid a huge expanse of overplayed Mahler this week from Dudamel and the visiting Bolivar Orchestra, there was a moment of beautiful music, simply played and wonderfully effective for it. The program was an evening almost entirely of works from Vivaldi played by Europa Galante under their music director Fabio Biondi and accompanied by the vocally and visually gorgeous Vivica Genaux. The crowd was small even for a Tuesday and paled in comparison to the packed and endlessly enthusiastic audiences Dudamel and his orchestra have played to. Which only goes to show there is no accounting for taste. Genaux and Europa Galante are the real deal, professionals who know without hesitation exactly what they are doing and, despite the smaller scale, they were met with the deserved ardor of the discerning crowd on hand.

Biondi’s players are one of the more polished period-practice ensemble around. Their playing is particularly crisp and never boring. In addition to two Vivaldi concertos they also presented works from Nardini and Locatelli. The Locatelli concerto, subtitled “Il pianto d’Ariana” (The Weeping of Ariadne) in particular benefited from the polished, more lyrical approach. Biondi’s players are quite good in bringing out the sort of thematic and emotional detail that modern audiences tend to gloss over in Baroque works now that their ears have become accustomed to much broader 19th-century dramatics. Of course, the evening rotated around mezzo-soprano Genaux who was as stunning here as she was during her appearances with Philharmonia Baroque Orchestra last fall. She has a smaller sized voice that has kept her close to concert halls and smaller European houses for much of her career and she was challenged by the relatively large WDCH space. But unlike some vocalists with similar sized instruments, Genaux has actual Baroque technique to show off and readily manages the floral ornamentation of coloratura passages in such hallmarks as Vivaldi’s “Agitata da due venti.” She could also be heartbreakingly tender as with “E prigioniero e ré” from Semiramide. There are few vocalists that can imbue these Vivaldi arias with the color and pathos Genaux does, and even in this overly large space she was a thriller. Next time around here’s hoping she gets an audience that corresponds more accurately to the size of her talents.