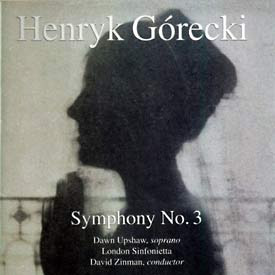 On Thursday, things finally settled down a bit for Gustavo Dudamel and the Los Angeles Philharmonic. Over half way through the current enigmatically titled “Brahms Unbound” survey of the composer’s major symphonies and the German Requiem, the orchestra seemed to hit its stride with the first really enjoyable show of the series. Why that is, I can’t exactly tell you. Maybe it’s just that the practice time together during the series is finally reaching a critical capacity. Or perhaps it was the sad circumstances that had led to a change in the evening’s program –the loss of the previously planned new work from the late Peter Lieberson in favor the Requiem–like Górecki’s Symphony No. 3. But it did work right from the beginning. Given the length and scope of the Górecki piece, the other piece on the program, Brahms’ Symphony No. 3, had been moved to the front of the show. It was a wise move in that it took pressure off the performance. Dudamel kept tempi on target and a larger amount of the work’s overall structure could be appreciated. Dudamel still exhibited his tendency to keep the musical CAPS LOCK button down with an urge to treat all details great and small with an equal weight, but this was definitely the most easy-going his Brahms has been throughout the series.

Of course, the reordering of the program was enacted to give the work that is Górecki’s primary claim to fame room to breathe. His Symphony No. 3 has a notable recent history. Composed in the mid-1970s, the work is subtitled Symphony of Sorrowful Songs and features a solo vocal part for soprano. The Polish texts vary, but all three reflect on loss, including the final movement, which concerns a mother’s pain at the loss of her son in an act of political violence. It’s pretty and very quiet, meditative music that’s clean and rather plainly developed. The symphony, like all of Górecki’s music, was largely unknown until 1991 when the London Sinfonietta released a wildly popular recording of the work under David Zinman with Dawn Upshaw. In fact, the work has received so much attention, that it has suffered somewhat in recent years from a critical backlash questioning the work’s musical sophistication and technical merit. But the work is still programmed frequently, often in settings like this weekend’s where it can serve as a reflection for any number of tragic losses in a manner not unlike Verdi’s Requiem or several other memorial themed works. The tragedy of the Bosnian War of the early 1990s may have contributed to the emotional reaction audiences had to the work then, and there are sadly just as many tragedies to commemorate now from the war crimes of Ratko Mladic to the tragic loss of Lieberson.

And under those auspices, it was a very moving performance. The soloist was Jessica Rivera who was planted right in the center of the orchestra, providing both an integration of her sound and a rather dramatic visual effect at some angles. Again the temptation to drag things out beyond their breaking point was resisted by all and a sense of reconciliation permeated the score just as Górecki had intended. If I had any quibble with the performance, it was the somewhat maudlin lighting and theatrical flairs used to augment the performance, with the audience kept in the dark and the orchestra using lights on their stands in addition to the requisite spots for conductor and soloist. It struck me as a step too far, attempting to provide a visual telegraphing of the emotional content of the piece, just in case you missed it, as if the audience couldn’t be relied upon to sort out the point on their own. Still in a show loaded with the kinds of moments that Dudamel and the L.A. Philharmonic have trampled over in recent months, the show was a refreshing and rather touching surprise.

I'm surprised by your review here. I came looking forward to the Brahms third and was disappointed in this performance. Where were all those beautiful Brahms melodies in this symphony? Even the third movement came off underwhelming. Maybe it was the ALL CAPS treatment that you mentioned that didn't work well.