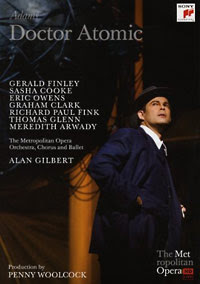 There was an embarrassment of riches coming out this week from The Metropolitan Opera on DVD. Some of the best of their recent Live in HD series finally reached an in-home format where you could watch it at your leisure on something other than a computer monitor. And as much as I loved the Salome and Madama Butterfly from the 08/09 season, I feel a particular affection for the other two big releases this week, John Adams’ Doctor Atomic and Verdi’s Simon Boccanegra in that they were both productions I had the pleasure of seeing live in the house. (You can read my prior thoughts on Doctor Atomic here and Boccanegra here.) The releases are notable further in that they both capture operas recently released with similar stars in other productions from other houses. This is the Metropolitan Opera's unique take on these operas and represents a snapshot of where the house is artistically right now.

John Adams’ Doctor Atomic has installed itself already in the minds of many as one of the new century’s first important new operas. Less than a decade old, the Met has provided Adams’ dark, dense, and beautiful opera with its second available DVD recording, which is a testament to how strongly some people believe in this particular opera. I’m one of them and was thrilled to see Penny Woolcock’s staging live on, even if I don’t think it improved on the original Peter Sellars vision seen in both San Francisco and Chicago. Gerald Finley stars again in the role he created of J. Robert Oppenheimer. Finley’s performance of the Act I concluding aria, “Batter My Heart”, remains an indelible moment in contemporary opera and one seriously beautiful piece of music. There are appearances from Richard Paul Fink, Eric Owens, Meredith Arwady, Thomas Glenn, and Sasha Cooke to appreciate as well. But perhaps the other name associated with this production that makes the DVD so highly recommended is the Met Opera debut of conductor Alan Gilbert the year before he took over his current post as Music Director of the New York Philharmonic. His masterful handling of this contemporary score was a clear indication of the passion and interest for new music he would bring across the Lincoln Center Plaza and it makes for one exciting opera performance. Plus, if you look hard enough, you may see me in the audience for this taped performance. 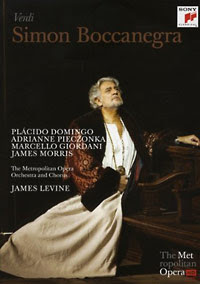 Understandably, though, Doctor Atomic is not necessarily everyone’s cup of tea with its abstract, amalgamated and often poetic libretto. And for those folks, the new release of Verdi’s Simon Boccanegra may be more to their liking. The big story here was the casting of opera super-star Placido Doming in the title baritone role. And while it’s possible to see this simply as stunt casting, even a cursory viewing of the work indicates quite the opposite. True, Domingo’s tenor voice greatly changes the familiar tone of the title role. But his star power, acting expertise, and sheer tele-magnetism make this a performance worth seeing. This revival of the somewhat dated Giancarlo del Monaco staging can look a little dreary in the flesh, but the HD cameras inject some life into the dark and static sets making everything more intimate. There are other DVDs available of Domingo singing this role in the recent past that are now available. But none of them have the superb Metropolitan Opera orchestra or music director James Levine on the podium. This may not be the way Verdi imagined Boccanegra sounding, but I'd wager even he would be hard pressed to deny that it is a great and very watchable performance.

Brian - What do you think are the reasons for such spotty and delayed releases of their HD productions? Do you think there are rights-management issues?

I could understand their hesitation in investing in DVD publishing, but there are also some conspicuous omissions on the Met Player.

See you at Hvorostovsky!

I imagine there are some rights issues given that performers may be contracted with different labels. You may note that not all of the Met's HD broadcast DVD releases have been on the same label. In fact the DVDs in the Levin 40th anniversary box set aren't even all on the same label.

But I also have a feeling that there may be other economic issues at work. The Met is probably interested in "rolling out" access to the films much the way movie studios do - theaters-online-TV-DVD. I imagine they are alos interested in not creating too much of a glut in the market for any one opera or artist. Plus they probably have to work with label's own release scheduling.

But honestly this is all speculation. I really have no idea.

Brian : 6:27 PM
and speaking of not released --- where is the Barber with Mattei, Donato and Florez?