In the Realm of the Senses 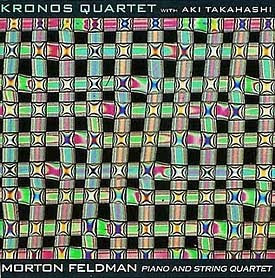 A live performance of any of the late works of Morton Feldman is a special occasion. Not only because they can involve unusually long amounts of time, but also because they involve what composer David Lang calls a different kind of virtuosity. As Lang noted in program materials written especially for Tuesday’s Piano Spheres concert with Vicki Ray and the Eclipse Quartet, Feldman requires a particular kind of restraint and endurance from musicians. This is not about flashy, fleet dexterity or grand gestures. Feldman is about maintaining: keeping notes and chords hanging together long enough to move the music forward, sustaining its life. Tuesday’s Piano Spheres was devoted entirely to Feldman’s Piano and String Quartet which he wrote specifically for the Kronos Quartet and Aki Takahashi. The piece, which is comparably short at around 80 minutes in contrast to other pieces Feldman composed around the same time, received its world premiere right here in Los Angeles in the mid-1980s at a once important venue for new music, the Los Angeles County Museum of Art.

So it was a welcome return for this seductive and in some ways delicate music to Los Angeles with local keyboard hero Vicki Ray and the Eclipse Quartet. The ensemble played Feldman’s seemingly endlessly repeating pairs of chords and the cautious slow arpeggios that punctuate them in between. The beauty in Feldman’s music has to be appreciated from a distance. In the moment it can seem maddeningly repetitive or nearly inert. But when a listener can let herself go in the flow of the sound, it’s a miraculous world where the smallest changes or alterations suddenly become glorious huge dramatic statements. There is a sweep to this music that unfolds slowly over the many minutes behind it. Not unlike some of the work of visual artist Andy Goldsworthy, there is a slow, organic process of change in which beauty is held. But you can’t force it – it has to come on its own over time. The Eclipse players and Ray seemed perfectly attuned to each other keeping the conversation between them going, even as the significant pauses between elements in the score constantly threatens the whole piece with collapse. It's rare and wonderful performances like these for which Piano Spheres was founded and it's why they remain so important to the musical life of Los Angeles.