Ghost in the Machine

On Saturday, I was in New York for the fourth performance of the Metropolitan Opera’s new production of Das Rheingold. The new vision, created by Canadian auteur Robert Lepage, replaced an over-two-decades old storybook version by the venerable Otto Schenk. Yet after millions of dollars, structural stage reinforcements, and immense amounts of hand wringing, the most notable thing about this new production is how remarkably similar it is to the one it replaced. Outside of a precious few special effects, perhaps the only real difference between the two is that disposal of the old sets raise concerns over formaldehyde and asbestos while ridding the world of Lepage and his team’s handiwork will bring up issues over mercury and other hazardous metals. The large 24-plank set piece undulates and repositions itself with relative ease and does produce some memorable images such as the first appearance of the Rheinmaidens floating high above the stage on wires in front of an interactive projection of an underwater world. But for all the trouble and money, the massive rotating set does surprisingly little. 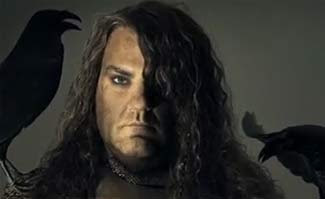 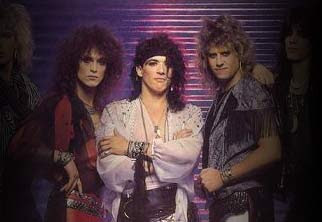 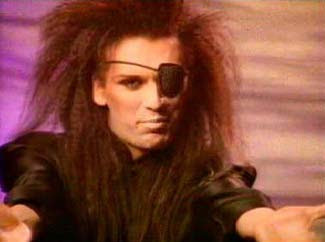 But no amount of machinery can take the place of actually directing a cast of vocal artists. And onstage Lepage has surprisingly little to say, new or otherwise, about Das Rheingold or its action. The principals wander around downstage for hours gesturing with little to do in costumes that are at best unfortunate. From Bryn Terfel as someone’s special homage to Pete Burns (or perhaps Ratt's Stephen Pearcy circa 1984. See above), to Patricia Bardon’s Erda whom my friend Jim described as the Cindy Brady of Erdas, no one gets out of this show without either a mess to wear and/or having to slide down the large planks of the set at some point while doing so. The laughter produced by the dumping of Fasolt's body off the set seemed unintended but was just one of such moments.


On the plus side, the musical qualities of the performance were quite high. Maestro Levine may not be bounding on or off stage for bows with ease, but his conducting seems unhindered in any way. The orchestra was superb throughout. Vocally, the revelatory performance of the afternoon belonged to Eric Owens. This is a big and well–deserved success for this personable and very interesting artist, and gauging by the audience response, he’s arrived here in New York. Oddly he was not evenly matched in the triad at the center of this opera. Bryn Terfel’s Wotan had a beautiful tone but was strangely removed and uninvolved. Richard Croft’s Loge was underpowered and neither particularly mischievous nor scary. He seemed like he stepped out of some buddy movie or video game. On the women's side, I was fairly impressed with Stephanie Blythe’s Fricka, who was never shrill, though I never got any real sense of the relationship between her and her husband in the staging.

Of course, I don’t want to go so far as to say that this design is so flawed that there is no hope for the many hours of Ring operas planned to follow in Das Rheingold’s wake. Lepage’s large set could be used more actively and provides many interesting possibilities that have yet to be explored. And furthermore, given that the Met is finally letting go of an older production that had more than overstayed its welcome is an important step. But Lepage’s new Das Rheingold is undoubtedly a half-measure. It needs to go much farther in terms of its ambition and scope to deliver something worthwhile and that doesn't mean just delivering more technological wizardry. But unlike Wotan and the gods of Valhalla, there is still some time to change this production’s eventual destiny, and hopefully Lepage and his team are thinking more creatively about their next steps.

Except for the "machine" Lepage has no ideas about the Ring or has anything but a passing interest in the psychology in characters therein. A 70's British cultural critic of some repute sums it up,"Pretty Vacant!"

All of Lepage's "imagination" seemed to be exhausted in figuring out how and when to engage the "machine" with nothing left under his rather unconvincing toupee to expend on how to engage the audience in the characters who inhabit the story of the Ring.

The faux 19th century costumes(Lepage is as interested codpieces as much as Fryer was obsessed by breasts), the 80's hair(Freia as Tracey Gold from Growing Pains... really?) lighting (What lighting, when the "machine" isn't activated white is all the color you need... when the "machine" as at rest the Lepage uses projections that look like hotel bathroom wallpaper designs) and blocking (has anyone seen anything clumsier on a professional stage then the "Freia hammock" the feeble attempt to engulf her with Alberich's gold?)seem haphazard and appear to be afterthoughts.

Jim McDaniels : 11:02 AM
You can say there was no new direction, and then say R. Croft's Loge was weak, but I thought that the concept was essentially to make Loge the moral center of the opera, half-immortal, resentful of the gods (Only allowed to eat some of the apples of immortality, reference to wishing he could burn all the gods) Loge isn't so much an immoral scam artist as a more or less unwilling cohort to Wotan, wishing he could be left out of it, and wanting to keep his promise to the Rhienmaidens. So, I thought Croft excellent in that regard. Also, you can say the lighting effects were cheesy, as some will..but I actually loved them I thought scenes such as the decent to Nibelheim with the rotated ramp and wires very effective, and the various sliding entrances and exits weren't any more stupid than the usual paper mache armored fat dude leaping into view wielding his paper mache hammer. At least there were moving objects and shiny objects to look at. A visual weakness (for me) was the somewhat weak and abstract depiction of Valhalla. Really, at least project some stone on the machine or something. Painted backdrop ftw? Something? All in all, greatly enjoyed.

Will Mego : 2:01 PM
You said exactly what I thought a whole lot more succinctly!!!

Lisa Hirsch : 2:43 PM
I think that this production epitomizes the Met's ambitions to move beyond the grandiose burdens of their more antiquated show-pieces and to create more progressive theatrical experiences. At heart, this echoes a larger cultural struggle between more conservative and stodgy American audiences (the Met's aging subscriber base, in particular) and opera supporters/practitioners who long to see more innovative and socially-resonant theatrical ideas. However, the first installment of Lepage's Ring falls a bit short on both technical innovation and theatrical finesse.

I get the sense that they didn't want to offend the old-timers by doing anything too spectacular with "the machine" (Lepage has a long history with Cirque d' Soleil, so clearly he's capable of genuine fireworks) and the dramatic stagecraft, costumes, and blocking felt like an awkward afterthought. My guess - and I too often get this impression with the Met - is that they suffer from an internal, bureaucratic hesitation to do anything too 'bold' or too stark or perhaps ideological, lest they arrive at "Eurotrash," whatever people think that actually means... And what we end up with are hokey Mary Zimmerman productions, ancient UWS'ers prematurely mourning the death of Zeffirelli, and a watered-down Tron-cum-Icelandic Ring that we have to live with for the next ten years. I say: don't be afraid to spice it up.

That said, I concur with OWA that the very charismatic Eric Owens stole the show, as Bryn Terfel looked on in constipated contemplation. I'm looking forward to seeing this in person in the Spring, particularly to hear Levine conduct... but a part of me is starting to long for Freyer's interpretation!

daniel : 11:57 AM
I saw Freyer's Gotterdaemmerung and what the Met is dragging out just can't compare, for intelligence, originality, and depth of insight. I hope the Lepage improves, but he's got to pay attention to the story, characters, and action as well as the set for that to happen.

Lisa Hirsch : 12:31 PM
Jim - I also noticed the codpiece fetish! that was weird.

Will - we've got a great, great Loge in the San Francisco Ring, Stefan Margita, who completely stole the show in 2008. Believe he was in the Met's From the House of the Dead last season.

Lisa Hirsch : 4:05 PM
Yes, the staging was B-, but shouldn't we be focusing mostly on the music? Is there another band out there that can match the Met Orchestra in this repertoire? Has anyone ever seen a better Alberich than Eric Owens? Granted that Bryn seemed strangely unmoved, but in a sense it helped Owens steal the show, plus Bryn's voice is in peak form, even without the dramatics that we know he's capable of. Ditto Stephanie Blythe, who didn't do much with her dramatic possibilities, but has arguably one of the top instruments in the world for this role. So, on balance, I would rate this among the better Rheingolds I've seen, and much superior to Freyer's version at LAOpera, which I thought detracted from the centrality of the music. (Note - I saw this via HD-Live in the SF Bay Area, and the in-the-house experience may have been different. I have seen many live performances over the years, but this was my first HD experience, and I have to say that it is VERY different¡¡
G.Glenn

Anonymous : 4:08 PM
The stagecraft was a severe disappointment, but musically this was the finest Rheingold I've encountered on CD or live. There was no weak link in the cast. Levine and the Met orchestra shined.

Did anyone else notice that the Loge was loudly booed at the curtain call? While he sang with no menace or snarl, I must admit I've never heard the role more beautifully sung. Maybe that's besides the point given the character of loge, but still was it worth booing?

I've seen an Alberich as good as Owens, namely, Richard Paul Fink, a tremendous singer and actor. I'm not sure why you say Terfel's voice is in peak form. He sounded much, much better in the late 90s when I first heard him, and now sounds worn and with some loosening of the vibrato.

Yeah, the Met orchestra is great, they make amazing sounds, no doubt about that.

Jim, yes, there were some boos for Richard Croft, and Anne Midgette's review at the WashPost explains that in the house he was often inaudible. She thought most of the singers were too small vocally for the music.

Lisa Hirsch : 9:23 PM
With microphones at their feet everyone sounded healthy of voice and every voice sounded about the same size. I have to believe the people in the house heard something very different then what I heard blaring out the speakers at full wattage. Mind you Lisa from where I sit in the Grand Tier, everyone sounds small of voice at the barn that is the Met.

Lisa I agree that our LA Opera Alberich was just as fine as Owens. Our cast here was pretty close to Met's in quality and maybe surpassing it in personality.