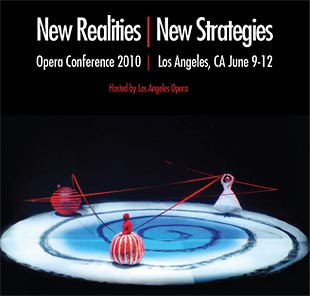 So on Thursday I got to meet a group of important American classical music writers including Tim Mangan, Mark Swed, and Anne Midgette. And no, I did not walk into a meeting of the executive committee of the Gustavo Dudamel fan club. The occasion was instead a panel discussion I had been invited to take part in along with these well-regarded journalists at the 2010 Opera America conference that has been taking place in Los Angeles this week. The panel was entitled “Critics, Bloggers, and the Changing Media Landscape” and was moderated by Sherry Stern, the Deputy Arts and Culture Editor for the Los Angeles Times. I enjoyed getting to meet the other panel participants and we talked about a number of topics in a wandering fashion that would be hard to reiterate in any detail here. I tended to be the odd man out in the group, given that most of the moderator’s questions concerned the kind of blogging that print journalists do as part of their broader job activities. This panel may have been about the changing media landscape, but it seemed most concerned about the area around traditional print journalists and the struggles and rewards they encounter when an increasing amount of their work is created for an on-line audience. I did learn a couple of interesting things, though. For one, Midgette noted that the Los Angeles Times Culture Monster blog is a respected model for other news organizations around the country. Ms. Stern also noted that Culture Monster has been "successful" in attracting worthwhile ad revenue. Who knew? But still I couldn't help feeling that a lot of this focus on news organizations that may well not be operating in a few years seemed misplaced. Not that these are irrelevant issues, but it seemed to me that this was still about the same press departments talking to the same journalists they always have.

Still, it was interesting to me to meet people I've read so often in the flesh. Tim Mangan is a gentleman and a true scholar. It’s easy for me to see why he’s so popular with the OC. Some of his inventive work on a range of topics has recently been picked up by bigger outlets than his home organization, the Orange County Register, and he deserves the attention. His commentary about his approach to writing about artists like André Rieu and Andrea Bocelli who hold little interest for him personally was quite interesting. The Los Angeles Times' Mark Swed meanwhile informed the crowd that he was an anarchist. No, really. And then he name checked John Cage twice in an hour. This, of course, was followed with his disdain for social media and his insistence that there is nothing inherently good about the kind of writing that appears on blogs or the Internet. The idea being that good writing is good writing wherever it appears and just because more people can get their thoughts distributed more easily doesn't make the conversation any richer. He's apparently only in it for The Art. Or at least The Art of Writing.

I was particularly taken with some of the commentary from The Washington Post's Anne Midgette. Perhaps the most interesting exchange I was involved in was when Midgette politely challenged me on my contention that I am not a journalist and that what I do here at OWA is not journalism. I’ll admit that the assertion is in itself meant to be somewhat a provocation. But I argued, and would continue to, that what I do here is not equivalent to what Midgette or other journalists do. As I’ve mentioned here before, I’ve had no formal training in journalism, nor am I a music professional in any way. I support myself with activities far outside the range of topics on this blog and it is this employment which pays for me to see the things I do and go to the places I go. While I certainly have and do express opinions here, I don’t feel that they are necessarily equivalent to those that come from a source with some formal education or training in the above areas. Now that doesn’t mean that I think what I write is necessarily worse or of lower quality. It just means that I think there’s something worthwhile about professional, well-informed opinions and that they are worth paying for, even in the arts.

But this isn't just about professional credentials. My hesitancy to accept a "journalist" label also stems from what I view as ideological differences I have with the tradition of journalism as a field of endeavor. For me, there's always this issue of the truth when it comes to journalism- getting facts right for "stories" that appear in order to inform some large public. But I've often sensed a real lack of awareness about the social and political forces that shape what is "news" and how these "stories" get made up to begin with. The post-modernist in me refuses to let go of the notion that "news" is essentially a bunch of made up information we as a culture arrange in ways to reaffirm or deny our own anxieties about ourselves. But still we insist on presenting information in contexts where we claim it is "fair and balanced". Well, I don't want that to be true here. OWA is not fair and I certainly hope it isn't balanced. I don't mean to suggest that I think it isn't worthwhile or that you or anyone else shouldn't read it. I just mean that this is a world of words I have created and it may or may not have anything to do with reality. Or more accurately, it's this world of words that helps create reality. Specifically mine, but perhaps some of yours as well.

He's apparently only in it for The Art. Or at least The Art of Writing

Then why is he such a shitty writer? He writes program notes, not reviews or articles; his latest defense of the LAO Ring was just press-release puffery at its worst (i.e. "We need this to be popular, ergo, it's good"). I can't tell you how often I read a review of his and I have no idea what the concert was like: was the conducting any good? did the orchestra play well? what about fluffs and miscues? All that's irrelevant, I guess, as long as we know what teacher the composer studied with.

OWA is not fair and I certainly hope it isn't balanced

It's why I trust your reviews. You're far more tolerant of minimalism than I would ever be, but I trust your tastes and opinions because you're not going to get pressured by an editor who might get not-so-subtle reminders from an organization about who pays for advertising in their rag.

Compare that to Mark Swed, who if he said the sun was going to rise tomorrow, I'd go check when I got out of bed.

Henry Holland : 11:45 PM
The question at the top of the comment above was probably meant to be rhetorical, but i think i have a possible answer to it anyway. The reason (at least a partial one) why MS is such a "shitty writer", as accurately described by HH with his usual flair of elegant eloquence, is that the guy is in fact a mediocre writer who thinks that he is a good one. While i may disagree with HH about the details of what exactly constitutes a good review, i do agree with his overall assessment of the Times' scribe. The really big question for me is - how come he has lasted so long in that position of significant importance while there are people right under Times' noses (TM, just to name the most obvious choice) who are definitely better qualified? Reading of MS talking about good writing could have been very funny, but in reality the situation is quite sad and unfortunate.

I'm so pleased you participated in this forum. Your comments in this post re your exchange with Midgette are perfect and I think your take on the line between journalism and blogging is articulated quite nicely. They invited the right guy.

Too bad there isn't a transcript- I would love to read it.

John Marcher : 11:50 AM
Brian:
I've followed your blog for a while, and am glad that you got invited to the panel. It would have been interesting to attend, without a doubt.

A certainly agreed with you more about Salonen (awesome) than about your take on Dudamel (I still enjoy his concerts even if I liked E-PS a LOT more), but I appreciate you sharing your opinions and insights from your non-professional (journalist or musician) point of view.