I'd like to feature a couple of recordings that come to mind after some of this week's more notable events. Not a lot of Unsuk Chin's music is readily available in the US but a good place to start to learn a little about her is this DG recording Akrostichon - Wortspiel which features four shorter works. I don't think the recored completely captures some of her playfulness, but it should whet appetites until Alice in Wonderland comes around on DVD. 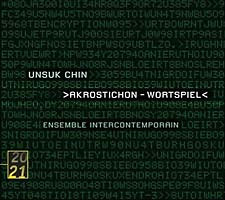 Of course, speaking of DVDs that have come out of Munich in the last few years, seeing the excellent Alcina last night reminded me of what a good experience Munich has had with Handel operas lately. Exhibit A is this fantastic film noir inspired version of Rodelinda which is both visually stunning and beautifully sung. It makes the Metropolitan Opera's production from just a matter of a year or so later look like a sad-sack mess. I once heard a dinosaur audience member complain to David Gockley about this very production, which San Francisco imported under Pamela Rosenberg's tenure, begging him to bring to the stage "Handel done the right way." Heaven only knows what that is (togas? 18th century garb?), but with Ariodante creeping back into the SF season for summer 2008, let's hope it's more like this Rodelinda and less like, say, the Met's atrocious John Copley Gulio Ceasare from last season.