Placido Domingo is not the only artist who can manage a startling singing career well into his later years as evidenced by the amount of attention and the glowing notices that continue to follow Edita Gruberova around Europe. Not only has she had another huge success with Lucia in Vienna this year, but this recent DVD of her first Norma for Munich in 2006 at the age of 59 stands as a testament to good genes and smart career management. Her performance is remarkable and this DVD is a must for those of us not lucky enough to see her in Europe or during one of her relatively rare US performances over the last few decades. 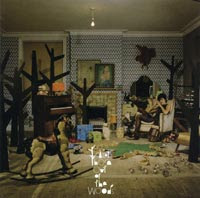 Although it took over a decade, Tracey Thorn's follow-up to her first solo recording, A Distant Shore, finally arrived this year. In many ways it is not a surprise in that just as the music of her collaboration with Ben Watt, Everything But the Girl, changed from a more jazz-influenced pop sound in the mid 80s to big beats and electronica in the 90s, the new disc, Out of the Woods is no folkie collection for wallflowers. Thorn is perhaps one of the most underrated female voices in pop music, and it's great to have another solo disc from her. It grows on me with each listen.