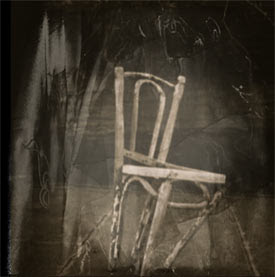 While it may be true that you can see forever on a clear day, depicting therapy sessions on stage is a tricky business. Oh sure, they creep up on stages and screens all the time, but the show that uses a therapy session to structure a narrative risks failure more often than it does success. It’s the golden rule – therapy is usually interesting only to the person receiving it. Which is I was so pleased on Sunday to see a new chamber opera on Sunday night entitled Sylvia by the young composer and librettist Julia Adolphe. Ms. Adolphe had set up shop in a La Brea Blvd. art studio over the weekend along with seven instrumentalists, four vocalists a director and a conductor to produce one of the most ambitious and defiantly audacious pieces of musical theater I’ve seen this year. There are so many things about this one act, one hour piece that shouldn’t work, and yet they all do from both a theatrical and musical perspective.

First there is that therapy session issue. The opera takes place entirely within an hour long psychodrama therapy sessions of a patient named Sylvia sung here by a powerful and affecting Sophie Wingland. Besides Sylvia there are two doctors, mezzo Jessica Mirshak and baritone Mario Diaz-Moresco, and another patient, Matthew Miles. Sylvia is exploring issues of sexual abuse she experienced as a young teen at the hands of a family friend. Strike two – direct recounting of childhood sexual abuse tends not to go over well when sung, Benjamin Britten aside. And just to make everything a little more complex, strike three, the four characters in the opera are repeatedly acting out the characters in Sylvia’s story as she recounts her abuse. Sometimes the characters will switch the roles they are playing within the reenactment of the abuse narrative from scene to scene, too, with Sylvia at times playing her mother, father, self, and others.

And yet Adolphe’s work by no means strikes out. In part due to her lucid, direct libretto and in part due to the clear-headed logical direction of Maureen Huskey, Sylvia manages to be abundantly watchable. Despite its billing, the esoteric psychodrama of the scenario is played down in favor of an emotional narrative. It’s rather powerful, as well, considering the fact it deals with material not typically treated in this manner operatically. There is no question about what happens to Sylvia, unlike those young men of Benjamin Britten’s nightmares, and the story gives a singing voice to the silent. Adolphe’s music is smartly written as well. The sound, like the libretto, is accessible without being arch or overly dramatic. At its best moments it reminded me of Samuel Barber at his illustrative best. Sometimes Adolphe relies too heavily on the libretto to communicate the emotional context of scenes, and the music, while pleasant and always there, more often than not accompanies the action and actually explain it without words. All the young soloists gave solid performances especially considering their demanding roles that would constantly shift between different characters and attitudes.

If Syliva is any indication, Julia Adolphe is a composer who’ll continue to be worth following as her career develops. This weekend she demonstrated a knack for taking difficult unwieldy material and turning it into something with a real dramatic narrative and a compelling sense of development. She’s proven she can write about things others are wary of, and its that kind of ambition with the talent to back it up that makes musical careers.