From Freud to Foucault to Prince, the song remains the same: there’s joy (and plenty of other things) in repetition. Such was the case on Friday when L.A.’s most exciting and relevant group of young musicians, wildUp, gathered at Beyond Baroque in Venice for the latest in their increasingly frequent concert series. The exuberance of artistic director Christopher Rountree and his chamber orchestra of all trades underwent a veritable sublimation; their pure energy threatening to change physical states without notice. Friday’s broad, adventurous program had a large agenda covering everything from the mechanistic production of music à la Conlon Nancarrow and George Antheil to the sly, spirited arrangements of pop and punk rock songs that were the centerpiece of the evening. All of it played with more heart than you’re likely to see elsewhere.

The first half of the show began with an exploration of the mechanistic production of sound. Richard Valitutto (who like the entire orchestra was so impressive playing the music of Sofia Gubaidulina at REDCAT this spring) played two contemporary “piano rags" – gleefully bastardized versions of the American originals - from William Albright and William Bolcom. Building on this, he was joined by violinist Andrew Tholl for Nancarrow’s Toccata for violin and player piano with Tholl playing alongside the prerecorded and decidedly superhuman pianola. Tholl, as he did at several points in the evening, amazed with his rapid-fire playing. A movement from George Antheil’s First Sonatas for Violin and piano was next. It was introduced, fairly I think, as a musical precursor of punk rock, a point punctuated by Valitutto's ferocious attack on the score that brought out the mechanistic qualities of the music. But this was all prelude to works from composer Clarence Barlow who joined the faculty of UCSB a few years ago and was present at theperofrmance. Both works performed here by an ensemble of strings, percussion, keyboard, trumpet and clarinet started from an atonal base that soon gave way to references to popular songs. The Beatles' "Michelle" mysteriously arose from Sachets des ciseaux Insatiables with a riff from Bizet’s Habanera to wrap things up. Which was almost as deliriously amusing as the rhythmic layering used to disguise Prince’s “Sexy MF” within Septima de facto. The freewheeling excitement of both of Barlow's pieces couldn't have been better suited for the polymorphously effervescent wildUp players. 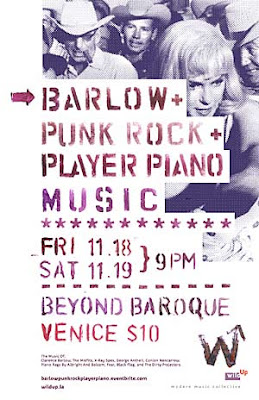 But the goal here was more than cover band idolatry, and Rountree insisted, going into the second half of the evening that these performances were meant to reflect wildUp’s own spirit and approach to music. What followed were varied, sometimes witty, and often attractive arrangements by Tholl, Chris Kallmyer, and others of seminal punk rock songs from Fear, Black Flag, The Misfits, and X-Ray Spex among others. The players remained the same with additional drums and electric guitar from sound artist Kallmyer. The sound was fierce and sizable in its own way complete with amplified bassoon riffs (courtesy of Archie Carey) that would not have sounded out of place on the original versions of any the songs of the aforementioned artists. And while things didn't quite get as loud as the available ear plugs at the door might have suggested, it was a unique version of the original punk sound. Most of the vocal lines were left intact with various players taking turns including bass player Maggie Hasspacher who lead on X-Ray Spex' "Oh Bondage! Up Yours!" and made a unique addition to The Misfits' "Where Eagles Dare". Even Rountree himself turned to face the audience at one point during a rearrangement of Dirty Projectors' arrangement of Black Flag’s “Gimmie Gimmie Gimmie” to sing-shout along. And while it may not have achieved the same decibels it was decidedly a punk rock moment all its own and true to Rountree's promise it was an arrangement and performance uniquely wildUp's own. The evening was heartfelt and organic with the kind of passionate music making and energy you don’t need a marketing campaign to convince you of. The show repeats again on Saturday, and you can check out the rest of their plans for the season on the website.