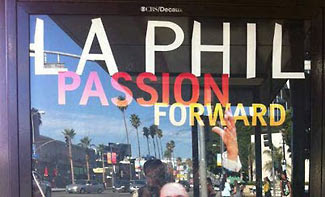 Over the last few weeks, ads like the one partially pictured above have gone up all over town advertising the upcoming season for the Los Angeles Philharmonic. Non-subscription tickets go on sale Sunday to the public. To answer your first question, yes, someone does get paid to come up with tag lines like this. To answer your second question, no, I have no idea what this is supposed to mean either. And no, thinking about it more won't help. The one thing that does strike me about “Passion Forward” though is that at least the marketing folks over at the LA Phil have decided to give us the second “s” back this year. But never fear – overpriced T-shirts with the Dudamel quote “Music is a fundamental human right” emblazoned on them are still available in the Walt Disney Concert Hall gift shop.

The first thing that came to mind seeing that bit of inanity is a "Project Runway" contestant opining, "and I think my design is very Fashion Forward." Maybe that's where they got it from.

Civic Center : 11:05 AM
"Fashion forward" is a very common phrase in design. It does beg the question: who do they think their target audience is?

gilbwallian : 7:55 PM
Yes, "fashion forward" is certainly the reference here. But what does this tag line mean exactly? That LA Phil concert attendance is fashionable? That the LA Phil is somehow ahead of the pack when it comes to the elusive "passion" quality? That the ensemble's performances are somehow more emotionally cutting edge that comparable experiences?

All of this seems possible but is simultaneously marketing nonsense. I suppose though that the ads must target people who don't regularly attend LA Phil concerts with Dudamel since they are perhaps the only ones who would still believe that his histrionics are somehow at the cutting-edge of anything. Or whatever it is we're supposed to take from this.

Brian : 10:32 PM
Brian dear it's very simple: Dudamel is Latin, the mucho emotional Latins as we all know, are all about el passion, hence "passion forward!"

If our music director was African-American then it would be "rhythm forward" because we all know dems people got dat rhythm thing going.

If our music director was openly gay the line would be "fabulously forward" because gays are swishy and say terrible witty things.

Jim McDaniels : 2:42 AM
Of course the ads "target people who don't regularly attend LA Phil concerts". There is no reason for them to target those who already do so.
Dictionaries give two basic definitions of "histrionics": a) theatrical performances (which does not really apply here), b) "staged or stagy conduct or exhibition of temperament usually intended to produce some particular effect or response in others" (Webster's Third New International) or "deliberate display of emotion for effect" (Free Merriam-Webster Online). Exhibiting temperament or emotions to effectively produce an appropriate response in the musicians is one of the main parts of a conductor's job. Therefore a conductor not engaging in some kind of "histrionics" would not be doing his or her job fully.

MarK : 9:47 PM
While I agree with your reading of the dictionary MarK, I suspect you are also aware that the word "histrionic" has carried a negative connotation for at least the last half century if not longer stemming from its association with hysteria and other psychiatric disorders marked by the inappropriate and excessive expressions of emotion in a given situation. This is the context in which I am using the word - a fact that I suspect you have picked up on as well.

Brian : 9:57 PM
Oh, Jim, oh, Jim -- that's a whole lot of stereotypes, dontcha think? Marketing is never that simple, and the Phil's staffers are certainly more attuned to nuance than that. As much as I'm not a fan of this particular slogan, I don't think we need to boil it down quite so cleanly.

I'm giving you the benefit of the doubt, by the way, assuming you're referring to marketing tactics here, and not saying that all Latins are passionate, all African-Americans are rhythmic, etc. We certainly don't need to support those nonsensical blanket statements. I have plenty of gay friends who are happy to be unfabulous, without judgment.

I think the LA Phil is riffing on the fact that Dudamel is in fact Latin and Latins are stereotypically emotional passionate people. I don't think it's remotely subtle. In his first year the LA Phil even used Spanish adjectives complete with accents in some of the advertising campaigns! I think LA Phil is that crass in its marketing.

Jim McDaniels : 1:26 PM
Yes, Brian, the thought that you used "histrionics" while meaning "excessive expressions of emotion" did cross my mind but i could not believe it to be true because as far as i know you saw most of Gustavo's programs in LA during last winter season and therefore should have noticed that he has become, if anything, extremely restrained and, visually, literally subdued in his conducting style.

MarK : 9:36 PM
Passion may be considered stereotypical Latin, but in Dudamel's case, there are probably few (if any) words that can better describe how he feels about music and how he approaches conducting. I like the slogan. I think they're saying that Dudamel and the orchestra are carrying their passion forward this season. Like, before it was about Dudamel and his passion, and now it's about taking the passion to new places. "Fashion forward" means at the cutting edge, so I'd guess that's the double entendre. The passion for music is at the cutting edge. I get it. It's pretty good, I think.