Los Angeles is one of those cities that no matter where you go, there you are. It seemed that everywhere I went on my recent trip to Europe that Los Angeles was not far away from me like some figure just out of the corner of my eye. Take Nicholas Hynter’s lovely production of Phèdre at the National Theater which I caught on a Saturday afternoon. Who would have thought setting the piece at the Getty Center would be so effective. With it’s pale Travertine walls and blue seaside vistas, all that’s missing from the staging for the total L.A. experience was the cappuccino cart. Helen Mirren was certainly regal and fun to watch, but I’ve always found Ted Hughes translation, used in this revival, a bit dry and severe. On the other hand I did get to see Margaret Tyzack who was superb as Oenone. Despite all the sold-out shows and big hype it was rather straight-forward. 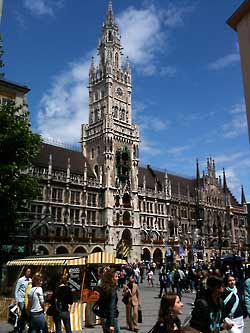 Of course, my time away was somewhat marred with a case of stomach flu that resulted in my missing out on a performance of Massenet's Werther in Munich. Worse yet is that I was trapped in bed in the hotel room on the day of you-know-who’s memorial service. I won’t go on about that matter but it did make me glad I wasn’t at home dealing with gridlock and other craziness stemming from all the hubbub. Of course, the gloved one was everywhere, including the Arte channel, which had interrupted its usual fare of operas, art films and classical performance for 1988’s Moonwalker, which is decidedly not the high point of Joe Pesci’s career in case you’re wondering.

There was time for some shopping, though, and I picked up a number of recordings including the long awaited release of Thomas Adés' The Tempest on EMI and a great new release from Mark Padmore featuring songs from Benjamin Britten. I also commemorated my visit to Munich by picking up the first release from the Bavarian Opera Orchestra under the leadership of its recently appointed musical director, Kent Nagano. The orchestra gave a number of wonderful performances last week, and Nagano's Lohengrin was masterful. The new recording is a first rate performnace of Bruckner's earlier version of the Fourth Symphony. It's a hugely successful turn and hopefully the first of many we'll here from this ensemble and director.

But I was glad to get back home to be greeted by tickets for the Fall. My Los Angeles Opera and Metropolitan Opera orders had arrived. It's going to be a great Fall with Janacek and Esa-Pekka Salonen. Oh, and in case you're wondering, the most overrated and already overhyped non-event of the rest of the year will be the October 3 free appearance of Gustavo Dudamel with the Los Angeles Philharmonic at the Hollwood Bowl as part of his arrival as the new music director for our beloved orchestra. And what better way to say bienvenidos than stack parking, Taj Mahal, 5 hours of community youth orchestras, and yet another performance of Beethoven's 9th. My advice: skip it in favor of either the Thomas Hampson recital at the Dorothy Chandler Pavilion that night or a concert with Marianne Faithful at Royce Hall. Well, I think that clears the deck for now.

Welcome back, hopefully in a fit of wellness.
You are so correct in your assessment of the Oct. 3 event at the bowl: good for many who might not be able to see him or the orchestra, as well as Taj Mahal.
But with the season beginning the following week with GD's Mahler First, patience will be a well-rewarded virtue.