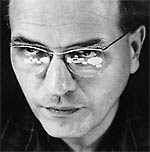 The Westside of Los Angeles is not to be outdone, even when in comes to 20th century art music. LA has had an embarrassment of riches when it comes to 20th century music and, in particular, the music of Olivier Messiaen lately, including spectacular LA Philharmonic performances of Des canyons aux étioles and Quatuor pour la fin du temps. Meanwhile in Santa Monica, the Jacaranda chamber music series have put together “The OM Century” – two years of shows dedicated to the works of Olivier Messiaen, those who inspired him, and those he himself inspired. Jacaranda currently operates out of the First Presbyterian Church of Santa Monica and Saturday they presented a program entitled “In Captivity” which concerned music that Messiaen studied, performed, and wrote during his time serving in the French army during WWII including his detention in a German POW camp. The stories of Messiaen's performances of Bach on organs during his services and the Quartet's premier in the POW camp are now legendary, but hearing these works now in this modern church in Santa Monica gives them new perspective.

The first half of the program included some of the music Messiaen studied from pocket scores during this period including three segments of Berg’s Lyric Suite and Ravel’s Ma Mère l’Oye. The program opened with Bach's Toccata and Fugue in D minor for organ setting an appropriate tone for a composer whose works were heavily influenced by his own spiritual beliefs. The Denali Quartet then performed the Berg with the assistance of soprano Elissa Johnston. Berg’s pieces can be a tough sell, but here they were filled with longing. The Ravel is written for four hands and pianists Gloria Chang and Mark Alan Hilt gave a beautiful rendition of the work.

All of this prologue provided insightful foreshadowing to a performance of Quatuor pour la fin du temps, the centerpiece of the evening. Timothy Loo and Sarah Thornblade from Denali were joined by Chang and clarinetist Donald Foster for the piece, and, while the playing was a little rough around the edges, overall it was highly effective highlighting the spiritual and timeless qualities of the music. Of course the setting helped too in that even with the lights down, the rather modern white interior of the church seemed filled with light as the rain fell against the large stained-glass windows on either side of the hall. It may not have been Portland, but it was an excellent opportunity to hear music far too seldom programmed or played. The Jacaranda series will continue through this year and part of next. You can check out their upcoming schedule here.