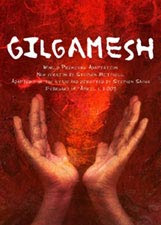 The other highlight of last weekend was seeing a number of world premiere plays around Southern California that are worth mention to varying degrees. In Pasadena, the Theater at Boston Court has a new version of the Gilgamesh legend adapted by Stephen Mitchell under the direction of Jessica Kubzansky and Stephen Sachs who was also responsible for the stage adaptation. Boston Court is a great facility and already in its short history, this company has developed a reputation for engrossing, technically sophisticated productions. Unfortunately, this was not one of them. Though not an unattractive staging, the adaptation is marred by an overly primitive approach and uninspired language. The Middle Eastern flair lends a kind of a Sinbad feel to the proceedings – and I mean that in both the lame 80s comedian sense and the Ray Harryhausen sense. Needless to say the nudity and simulated sex didn’t help much either.

Better results were to be found at the Mark Taper Forum which is currently hosting the world premiere of a new play from Lisa Loomer, Distracted. The play concerns a mother struggling with her 9 year-old son’s increasing behavioral and attention problems and whether or not she should pursue medication of other interventions to address what seems like a constant stream of new concerns. The production boasts several stars including Rita Wilson as the mother, Bronson Pinchot, and recent OSF favorite Ray Porter as the father. This rather minimal staging relies on a number of large screens used to project a constant stream of images and backdrops that assist in creating a sense of hyperstimulation for the audience. Often funny, Loomer casts a good balance of views and keeps things moving. However, her reliance on character asides and direct address to the audience becomes tiring after awhile and it begins to seem as if the play is more about incorporating all possible positions and opinions for the sake of completeness than it is about having a cohesive narrative drive. Distracted does avoid sinking into just another TV movie of the week, but just barely.

On Sunday, I caught the last performance of the new play from Julia Cho, The Piano Teacher, which got its world premiere at the South Coast Repertory. Cho continues to plumb the territory of the shifting nature of memory and how this plays out in the lives of people who have been abused. The play is largely a solo monologue by an elderly retired piano teacher who reaches out to former students in an effort to combat lonliness. Her efforts backfire when she discovers that memories of their childhood piano lessons are often shadowed by the violent and sexually graphic stories her now-deceased husband would tell them in the kitchen while awaiting their appointments. This Homebody/Kabul strategy works largely on the strength of the performance of Linda Gehringer in the title role. Of course, when the work strays from her, particularly in the final extended monologue from her former student Michael, things fall apart somewhat. Still, this is a play with interesting ideas. It plays with many of the same issues as Martin McDonagh’s The Pillowman but without the same preoccupation with shock value. In Cho’s play, the stories Mr. K has told may or may not have had a lasting negative impact, but in The Pillowman McDonagh suggests that the telling of these stories and the process of constructing memory may also be a source of agency and maintaining subjectivity. In The Piano Teacher the stories may not always be remembered by the listener, but their predatory function seems more certain. Cho leaves Mrs. K with troubled dreams and an uncertain sense of self having learned about her husband's past. She finds little ability to comfort herself with her own stories of the past and may be unable to escape an alternate version of her reality that she has now been made aware of. Certainly this is a play that can use some more development, but it has something to say and does a fair job of it, which is no small feet.