The times they are a-changin' 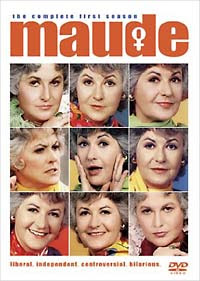 My partner and I were at Amoeba Records on Sunset last night and purchased several items. Upon checking out, we handed our selections that included a DVD of Derek Jarman’s Caravaggio, a 3-disc retrospective of the compositions of Julius Eastman called Unjust Malaise, and the new disc from LCD Soundsystem among others to the cherubic faced young man at the register. However, of all of these items, the only one that apparently warranted any of his affable commentary was the DVD release of the first season’s episodes from the 70s television series Maude. Thus, without sarcasm or irony, we were greeted with the following,

“Wow. That woman looks like a young Bea Arthur.”

As the air returned to my lungs and my view of the ceiling came into focus, I could here my more composed partner explaining that in fact a “young” Bea Arthur might more resemble Lucy Brown, Yente the Matchmaker, or Vera Charles. Luckily, a wheelchair was available to help one of such advanced age as myself to the car.