It’s become an annual rite at REDCAT - the late spring/early summer appearance by PARTCH, the ensemble that bears the name of California composer and perpetual musical outsider Harry Partch. The shows are always special occasions if for no other reason that they are the rare occasions where Partch’s music is performed on the group’s painstaking replicas of the composer’s unique instruments designed to challenge the tonal hegemony of his early 20th Century world. This year’s performance, entitled Bitter Music, was even further removed from what the players have presented in the past by honoring Partch the man and artist apart from his music. They accomplished this through a reading of Partch’s unexpectedly preserved diary from 1935-1936 which recounts not only his travels to Europe to work on a variety of his avant-garde microtonal projects, but also his years living as an itinerant “hobo” wandering the West Coast guest of the government-sponsored camps for the dispossessed, at times begging for food, and working whenever and for whatever he could.

It is this rough and unpredictable life that is reflected in the diary’s title and the intention in its performance, largely a dramatic reading by PARTCH’s John Schneider, is also meant to capture the composer’s interest in the everyday music of human speech. The text contains more than just written text, but also drawings, bars of music, a few songs, and specific intonations for some of the quoted dialog. Schneider’s reading was accompanied mostly by pianist Gary Eister, who joined in with segments of dialog he would sing and simultaneously sound out on the piano. On four occasions, the two were joined by members of the ensemble to perform full-fledged if brief compositions either referred to in the text or reflective of its content. Some of these, including the two vocal line version of Barstow that concluded the evening were some of the most poignant music the ensemble has brought to REDCAT over the years. The performance and music were recorded by the ensemble and released last year in an excellent set by Bridge Records under the same title, Bitter Music. 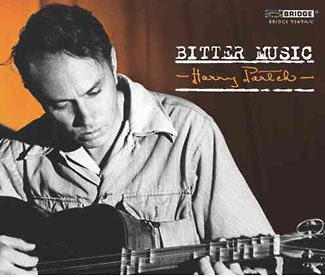 These diary entries and Partch's lovely, poetic writing impart an intensely personal view of the artist at a critical time in his development. In his own words, Partch sounds like a young man on fire with exploring the world, musical and otherwise around him. He cares passionately about music and changing the musical world. He is concerned about a uniquely American sound and tradition he sees bound up in the lives of everyday people, and there is no doubt from his tales of the Depression years that he is not speaking of them as an outsider. Partch’s drawings of the natural world and the men he lived with during these years have their own beauty, and they also reflect his homosexuality with a frankness not typical for the time. These were not always great times for Partch who could go days without eating and have his work ignored or rejected even when he had the financing to pursue his dreams for a period in Europe. But while this may have provided the bitterness in his music of the period and afterward, much of the diary reflects the composer’s joy for the world around him and his commitment and belief that music and art could be different than they were at the time. What was bitter for him, seems inspirational now and the audience quickly found themselves caught up in this two and a half hour reading with music which was daring for doing the one thing most composers dread – communicating with audiences about the world outside of their musical art. Partch himself thought the diary had mostly been destroyed and it is much to our benefit it survived, unexpectedly copied as part of another project, and given this life by those Californians dutifully keeping his work alive today.