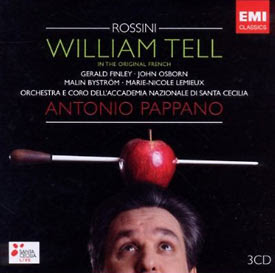 Antonio Pappano has been amassing a number of superb recordings over the last few years including notable versions of Verdi’s Requiem and Rossini’s Stabat Mater. The DVD releases of productions under his baton at the Royal Opera House during his tenure as Music Director there alone would make a case for his standing among the finest of the world’s conductors. This year, his winning streak continues with two new recordings that showcase his range in a number of different musical arenas. Since 2005 Pappano has been Music Director of the Orchestra e Coro dell'Accademia Nazionale di Santa Cecilia, and earlier this month, EMI released a live recording of Rossini’s William Tell from the ensemble in the original French. Rossini’s final opera premiered in Paris in 1829 and the critical edition used for this recording emulates the version presented at that opening. And while some will grouse that this may not be the most complete version of the opera, it seems appropriate that a performance that returns to the original French uses a text as close as possible to that premiere in that same language.

On hearing the first few bars, though, all concerns about these minutiae are pretty quickly swept away. Pappano leads a brisk, lively performance from the players and this most familiar of overtures immediately connects with new force. The cast is excellent across the board and features a very exciting performance from tenor John Osborn as Arnold. This is a notoriously high part and one of the reasons the opera is not often revived on stage. Yet, Osborn sounds great here with no strain and real excitement through the whole evening. This is not something you hear everyday and it recommends the recording in its own right. Gerald Finley sings the title role. He’s a singer I’ve always liked and in the last few years seems increasingly to be on the top of everybody else's list as well. His rich, warm tone is evident, and he stands out repeatedly in the ensemble numbers. Marie-Nicole Lemieux sings Mathilde and has fine technique and plenty of stamina. It’s also worth noting the chorus work on this CD, which isn’t the least bit sloppy either and is a pleasure to listen to. It’s a recording worth owning the physical CD of as well, given the packaging includes one of those great, if rather outlandish, classical CD covers that comes along once every so often as pictured above. 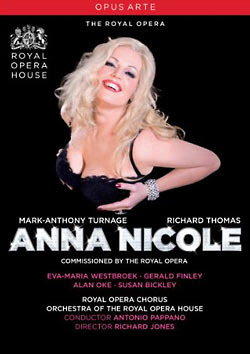 Speaking of outlandish covers...So we know Pappano excels with bel canto repertory. So what could be more of a contrast that the upcoming release of Mark-Anthony Turnage’s Anna Nicole filmed during its premiere run at the Royal Opera House in London earlier this year. ROH has a good track record of preserving its mainstage world premieres over the last several seasons, which has included Birtwistle’s The Minotaur. Anna Nicole shows Pappano in a very different light as he coaxes the ROH orchestra through Turnage’s tour of American musical genres. It’s all here from Jazz and Blues to Country and Western. Turnage isn’t afraid of going for some swelling romantic Hollywood soundtrack moments along the way either and Pappano masterfully keeps the show musically on an even keel with this panoply of stylistic indulgences.

I was most excited about the performance of Eva-Maria Westbroek in the title role. This is not entirely an easy sing and there are some moments where her Wagnerian inclinations serve her well. But this is a very physical and often not very glamorous character and Westbroek does it all from the nervous girl in the plastic surgeon's office to the voracious pole dancer. Gerald Finley shows up here as well as the lawyer Stern, the villian of the opera, and while Stern may not be quite as charming as Don Giovanni, Finley is masterful at the cold and calculating parts of his character's nature. Susan Bickley has a substantial part as Anna Nicole’s mother Virgie and also has some lovely dramatic passages at the end of the evening in a Brangane sort of way.

The show itself is certainly operatic if not necessarily groundbreaking. The narrative is often commented on externally by several characters who step in and out of the main narrative including Anna Nicole herself. It's like everybody's a part of the Greek chorus sooner or later. The story is a standard issue downside of fame and fortune tale. The young innocent Anna Nicole rides her oversize ambition out of her small town marriage and into a strip club and eventual fame only to pay the price. She’s a tragic figure, the victim of the predatory males around her—father, lawyer, husbands, et al. All of this is wrapped in a lampoon about American culture and this year’s model of the American dream. Richard Jones’ production, surrounded by garishly lit corrugated steel walls features any number of kitschy over-sized objects from bobbled-head dog figurines to an uncovered mattress big enough for Paul Bunyan. It’s like a Jeff Koons exhibit with singing. And while Anna Nicole is not The Great Gatsby, the criticisms that it makes about America are still worth making.

The opera conspicuously avoids much reflection on its title character’s actual work as a model and TV performer. The only mentions of her activities outside of her marriages and addiction to drugs come in later scenes where she is victimized by Stern who arranges for a series of the most invasive and personal media appearances. There's a great trio on the set of the Larry King Show with the host. And then there’s the language. The ROH chorus probably doesn’t get too many chances to dress as 1990s TV anchors and repeatedly sing lines with the words fuck and cunt in them, and Anna Nicole may have filled their quotient on that front for the rest of most of their lives. But the language seemed appropriate and was often quite funny. I was particularly amused by the chorus of small-breasted women in Act I and the Jimmy Choo shoe aria Anna sings in Act II. Despite all of this, though, I was drawn into the story and was admittedly moved by Anna Nicole’s tragic end. Turnage and his librettist Richard Thomas have a real sympathy for Ann Nicole that wins out in the end. This caring shines through and that’s what it’s really about, isn’t it?

If I had a Netflix cue, I'd put Anna Nicole near the top. So many possible things to say . . .
- Chorus sounds like they had a fun job; nothing like 4-letter words in 4-part harmony
- I'm guessing "Jimmy Choo" is easier to make rhyme than "Christian Louboutin"
- Really hoping LB Opera produces this locally (because I can't imagine Placido's crew putting this one on).