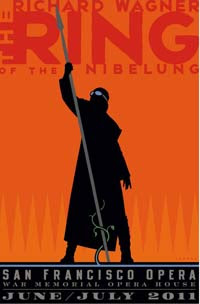 June is a month of package deals when it comes to the performing arts here at Out West Arts. There’s plenty to do and see in L.A. and beyond, but much of it comes in festival-sized bundles that can be exhausting in that wonderful way. It’s also an opera intensive month that will be centered around San Francisco where San Francisco Opera will be presenting its newly completed production of Wagner’s Der Ring des Nibelungen in three full cycles starting June 14. Despite what has been a so-so staging thus far from Francesca Zambello, the production boasts perhaps the best Brünnhilde going right now in Nina Stemme along with contributions from Mark Delavan, Ian Storey, and Jay Hunter Morris among others. I’ll be heading up to San Francisco on the 5th as well to see the premiere of the cycle’s Götterdämmerung, which never saw the light of day when Washington National Opera bailed on the completion of Zambello's Ring production after Siegfried and the economic downfall of 2008. All that Wagner may create a need for some contrast, so while I’m in town I’ll also be checking out the world premiere musical adaptation of Armistad Maupin’s Tales of the City with a book from Jeff Whitty and music from Jake Shears. I’d also mention that the Bay Area Rainbow Symphony will present a program with the music of Virgil Thompson on the 16th that will be joined by New York Times music critic and Thompson scholar, Anthony Tommasini.


Of course, the absolute worst thing about the San Francisco Opera Ring Cycle is that it falls right in the middle of a very exciting arts week in Southern California. Long Beach Opera will present three performances of David Lang’s The Difficulty of Crossing a Field starting on June 15 and repeating twice on the 18th. And if that isn’t enough, REDCAT, along with consortium of other organizations will present the first RADAR L.A. festival of international contemporary theater. Over 14 works from all over the world will be presented in several different venues around town from June 14 through June 19. Highlights include Austin, TX’s Rude Mechs who’ll present The Method Gun at the Kirk Douglas Theater. Meanwhile troupes from Japan and Latin America will take over REDCAT, and L.A.’s own Los Angeles Poverty Department will fill a stage with government issue prison bunk beds for their show at the Los Angeles Theater Center downtown. These are low-cost shows and you can check out the full schedule at the RADAR L.A. site.


And if you’re looking for adventurous music, there is the annual Ojai Music Festival, which kick off on June 9. This year’s program is curated by soprano Dawn Upshaw and will feature collaborations with Richard Tognetti and his Australian Chamber Orchestra. The six shows will cover everything from Beethoven to Schoenberg, including a staged version of George Crumb’s The Winds of Destiny, directed by Peter Sellars paired with music from Afghanistan. There will also be a world premiere from Maria Schneider on Sunday, which, like all the music on the schedule, will take place under the roof of the newly redesigned Libbey Bowl.


I’m also headed out to Saint Louis for the tail end of the festival season presented by Opera Theater Saint Louis on the 24th. This year will include performances of Donizetti’s La Fille du Regiment, Debussy’s Pelléas et Mélisande, and Mozart’s Don Giovanni. Perhaps most intriguing, though, will be a new production of John Adams’ The Death of Klinghoffer. This will be the first time the opera has been seen in a fully-staged version in the U.S. since the work's notorious stateside premieres in New York (at BAM) and San Francisco in 1991 and 1992. Whether or not this is a precursor to a renaissance for Adams’ most-controversial work is yet to be seen, but it is certain to be an event. (And FYI, in case you hadn't heard, OTSL will present the U.S. Premiere of Unsuk Chin's Alice in Wonderland in 2012 so you should start planning now.)

Of course, there are some non-festival oriented offerings around town as well, including the local premiere of Tracy Letts’ Superior Donuts at the Geffen Playhouse on the 8th. San Diego’s Globe Theater will mount new productions of Peter Shaffer’s Amadeus starting on the 5th, with Shakespeare’s The Tempsest, and Much Ado About Nothing not far behind. And if your ready for that first summertime trip out to the Hollywood Bowl, my first pick there for the summer would be the program featuring some of Japan’s best and brightest on the 26th, including Cibo Matto and the Yellow Magic Orchestra. Oh, and if you are lucky enough to have tickets already, Adele, whose career is skyrocketing, will hit L.A. on the 6th at the Greek Theater and on the 9th at the Palladium. I missed the boat on that show, sadly, so if you’ve got a ticket to spare, feel free to email me and hook me up. In any event, hope your summer gets off to a great start.

Labels: In the Wings

OTSL will present the U.S. Premiere of Unsuk Chin's Alice in Wonderland in 2012 so you should start planning now

Nice! I've watched the DVD I won from you twice, I'd love to see it "live". Any hints at what the other three operas are in 2012?

Henry Holland : 9:21 PM
No need to guess. They are Carmen, Cosi Fan Tutte, and Sweeney Todd.