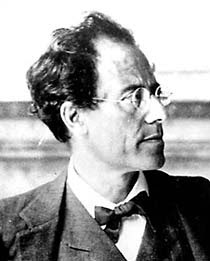 I’ve never thought of Mahler as a morning person (or perhaps more accurately a morning composer) but it turns out, he can be. Or at least that was my thought Friday as the Los Angeles Philharmonic performed Mahler’s Ninth Symphony as part of their Friday Midday series, which had a starting time of 11:00 AM. And, while it might seem a wee early for all that German Romantic mix of life and death in the natural world, it came off pretty well. The program was the second under music director Gustavo Dudamel in two weeks and like its predecessor, it will be presented on the orchestra’s European tour later this month (which will feature stops in Lisbon, Madrid, London, Paris, Cologne, Budapest, and Vienna). It was a solid and fairly enjoyable performance of Mahler's Ninth and likely as good of one as you might hear on an American concert stage. And while that may not be world class, it’s not shabby either.

Mahler has not been Dudamel’s strength up to this point in his career. His tendency for dramatic overstatement can make music that is already filled with the same insufferable. But things started off well on Friday with surprisingly understated first and second movements. He let the whimsical folk elements in the second movement be themselves without overworking them while keeping his exuberant bouncing on the podium to a minimum. The brass sounded lovely and large when they needed to be. Still there didn't seem to be an overall vision or direction to the performance. This is an immense work that can feel cathartic if built in the right way. And while there were many beautiful stretches, they often seemed to me to be individual moments never adding up to a bigger whole.

But that is not to say that the final movement wasn't well done. The finale's fitfulness and slowly grinding, quiet ending came off superbly here. The strings swirled beautifully, and Dudamel elicited performances that were remarkable for their passion and involvement from the players. There was plenty of scrappiness though, and I often wished for more precision and control. All that lovely quiet exposes the smallest foibles for players and such moments stuck out unpleasantly at times. But Dudamel's Philharmonic is first and always about grand gestures and on the whole, it was a successful, if occasionally disjointed, performance. And while the symphony may not have taken me somewhere I hadn’t been before this time around, it was an enjoyable trip getting there even on a Friday morning.