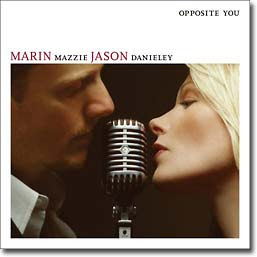 Well at least that is how Jason Danieley and Marin Mazzie described their concert appearance at the Orange County Performing Arts Center’s Samueli Theater on Saturday. Hooky in the sense that both are currently starring in Broadway productions: Danieley in the Kander and Ebb musical Curtains and Mazzie in the omnipresent Spamalot. I have to admit I met this news with mixed feelings in that I hate that sinking feeling the little white slip of paper in the program brings, but in this situation it was my gain because they are wonderful together and put on a great if brief show. (Of course I could go on about how these sorts of star absences have become de rigeur in New York, but I won’t. My advice – if you’re traveling to see someone in particular, you might want to check their web site or touring schedule first these days or attend a preview.)

Entitled “Opposite You”, the program which they are touring everywhere reprises their performance from Lincoln Center’s American Songbook Series a few years back, which they have now recorded for PS Classics. Mostly standards and showtunes, the evening relies on several extended medleys arranged around specific composers such as Harold Arlen and Stephen Sondheim. If there are people still unconvinced that a live performance is superior to a recording, here is exhibit A. Danieley and Mazzie are talented singers, but that is only half of it. What makes them some of the best in the musical theater is there ability to sell songs using more than their vocal performance. While the recording of the show is pretty, it seems hollow compared to how much energy and fun the same songs (more or less) were live. Perhaps the vocals weren’t as clean overall, but they were a joy to hear. Of course, singing duets always invites comparisons and the risk here is that Mazzie does come off as the stronger one vocally – Danieley did seem pitchy around the edges, particularly in the upper part of his range and he sometimes seemed relatively thin in tone. But this is rather a quibble compared to how well they deliver the Sondheim numbers. Mazzie will be in San Francisco in June during the summer opera season and will be worth another look in the cabaret setting then.