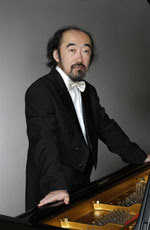 In general, concert programs follow certain conventions. Symphonic concerts rely upon the classical and romantic repertoire, as well as that of the “classical modern.” Here and there, a contemporary work will be incorporated. Baroque musicians stay in the 17th and early 18th century. New and contemporary music mostly has its own performing forums. Thus we have not only the “well-known” divide between “Serious Music” and “Light Music” according to the European tradition; there are also divisions within the practice of European art music.

Must this be? There is no convincing reason that the public prefers this state of affairs. But can we be sure? In earlier times music lovers were more open. One was curious and waited for something new, but naturally one also wanted something well-known, something familiar that offered great value.
-Dieter Rexroth for Kent Nagano

This extended quote comes from the concert notes to last night’s installment of the illustrious Monday Evening Concerts, now revived and operating in the Zipper Concert Hall in downtown LA. As with the other programs this year, this one was “curated” by an artist with important local ties, in this case the recent LA Opera music director Kent Nagano. The program, entitled “Bach and Music of Today”, was designed to suggest influence and relationships between the work of J.S. Bach and contemporary composers. This, in and of itself, is not a radical idea. The program notes themselves suggest ways in which compositions from the standard repertoire are often juxtaposed with newer pieces for just such a purpose – a strategy very familiar with audiences of the LA Philharmonic and its heroic leadership under Esa-Pekka Salonen. But, I would argue, last night’s program was both brilliant and sly in suggesting something much greater. I would suggest that this not always musically stimulating evening, also implied that modern music in fact influences the way we hear and interpret Bach’s music itself.

The program began with two preludes and fugues from The Well-Tempered Clavier, Book One that, like all the solo piano works on the program, was performed by Ichiro Nodaira. Nodaira was ringmaster for all of the evening’s performances given that he also conducted all of the small ensembles on the program including the U.S. Premiere of his own piece Texture du Délire I. His steady hand and excellent playing were key to this evenings success. Following the introductory pieces were two works: George Benjamin’s Viola, Viola and Unsud Chin’s Fantasie Mécanique. These works were presented here in the more traditional way modern and repertoire pieces are juxtaposed: the modern pieces here demonstrating responses to techniques and structures in Bach’s work. The Chin piece was especially mesmerizing with its mix of percussion, trumpet, and trombone. (It also builds my excitement for seeing her Alice in Wonderland this summer.)

Then things began to change. Nodaira performed Bach’s Chromatic Fantasy and Fugue a piece where, in contrast to the prior preludes and fugues, Bach sounds suddenly as if he is becoming slightly unhinged. The rules and structure begin to loosen and all appears to not necessarily be in the right place. The response to this piece included Kurt Rohde’s Double Trouble a sort of concerto for two violas which wasn’t particularly overwhelming and Nodaira’s piece. Texture had a sort of otherworldliness as its small group of flute, clarinet, cello, and violin were driven by three keyboards, two of which were electronic. Both of these works ostensibly deal with madness, and reinforced the notion of loosening or letting go of structure or an identity. Then came the big finale, and perhaps the most interesting statement. The program concluded with Ferruccio Busoni’s transcription of the Chaconne from the D minor Partita for solo violin. Busoni rewrites and reworks Bach into what sounds like a romantic piano piece in some ways unrelated to the source material. Here, Bach is no longer just Bach, but something else. Here it becomes a product of the time in which it is heard (i.e. Bussoni's time), not just a product of the time in which it was actually written. In some ways this is the most radical gesture: “Bach and Music of Today” is not just about the influence of the Master on today’s music. This program implies on some level that our understanding of Bach is always predicated on the reciprocal relationship, contemporary music’s influence on our hearing of Bach.

Of course this is just an initial thought. Even though some of the performances last night weren't especially inspired, the overall program seemed to me to be a twist on a relatively common program theme.