Hockney back at LACMA

This summer has been a good one at LA museums with two great touring exhibits in town at the same time: Robert Rauschenberg Combines at MOCA and David Hockney Portraits at LACMA. The latter show ran earlier this year at the Museum of Fine Arts, Boston and leaves LACMA this week for the National Portrait Gallery in London. Of course Hockney has a long history with LA and LACMA and, as in the past, this relationship is on display front and center in many of the works highlighted in this exhibit. Hockney's images have become iconic of Los Angeles in the last few decades and these portraits provide us not only with a glimpse inside Hockney's personal circle of friends and family but also an image of ourselves (Angelenos) and the place and time we live in. In a city where separation from one another is a fact of every day life, an LA-oriented exhibit that emphasizes the importance of our interpersonal relationships in this context can seem like an epiphany.

I waited until virtually the last week to see this show and I now regret it. It is well worth a second visit and I would encourage everyone who hasn't to see it here while they have the chance. The show cuts quite a broad swath and features work from the 1950s through last year. It is also broad in that it covers many different techniques and formats Hockney has worked in throughout his career: from painting and sketches to photography. One of the things I found most interesting about the exhibit was a sort of "parallel process". Because of his preference for portrait subjects he personally knows well, Hockney often paints the same subjects over and over again at different times in their lives, using different techniques and at different points in his development as an artist. Not only is it fascinating to see Hockney’s development over time, but also how this development as an artist is paralleled by observing the aging of a group of friends, family, and acquaintances. This mutual aging and development give rise to a sense of what is lost and gained with time both for the subjects and the artist.

To my eye, many of these works were equal parts joyous and melancholic, creating real emotion in what are often rather posed and static images with little motion. While I didn't always feel a sense of who any of the subjects were, I always perceived the artist’s reaction to them. I left the exhibit feeling I had seen more into the person Hockney is than any of his sitters - an irony for an artist who has done relatively few self-portraits. The works were filled with deep emotions from love in the images of the artist’s mother to the passion towards lovers like Peter Schlesinger. The exhibit invites us to think about how the ever-changing constellation of our personal relationships contributes to our sense of who we are. The processes by which people come and go from our lives is reflected in our development as we age. In some ways, the true radical spirit of this exhibit may be in the implication that we are shaped more by those passing through our lives in brief periods than we are by those "close friends" we have throughout. This notion may be best reflected in the mini-photo montages that make up 112 LA visitors. The piece is a record of individuals visiting Hockney in his studio over a period of time in the 80s. While many of these were close friends and family who would sit for portraits in other contexts, others are not. The piece emphasizes the random and contradictory nature or our selves and of the way in which our interpersonal relationships reflect this by condensing all of the subjects into nearly identitical and parallel spaces - every subject receiving the same valence as the others regardless of their importance or relationship to the photographer.

In the end, maybe this is another metaphor for LA - a city desperate to soak up every metaphor it can get it's hand on: LA is a city of visitors. Some visitors we know well and others we may not. But regardless of the attachment, all of these exeriences add up to make the people we think we are. 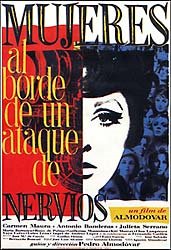 This month, Sony Pictures Classics began theatrical re-releases of 8 of Pedro Almodóvar’s films. This mini-festival, under the moniker Viva Pedro, is a marketing build up to the release of his latest film Volver in November. However, it is also a great opportunity to see many of these films again on the big screen. Last night was the opening film in the series, Mujeres al borde de un ataque de nervios which I haven’t seen in quite a while.

It’s aged well. The color and action still explode with the manic energy of Almodóvar’s work from this period. Probably more due to my aging than the film's, Carmen Maura is even more hypnotizing than I remember creating one of those performances that it is impossible to look away from. I remember her being good, but frankly not this good. The film is still very funny and hearing people laugh out loud in a movie theater is always a refreshing and too infrequent experience. 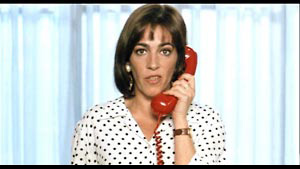 Of course nothing’s perfect and the criticisms of Almodóvar’s work are apparent here as elsewhere in his oeuvre. The women aren’t so much characters as fleshed out drag queens. Like many of the 20th century's great directors, the misogyny is sometimes hard to ignore though unlike Hitchcock it is better disguised and certainly mixed with a great deal of love as well. 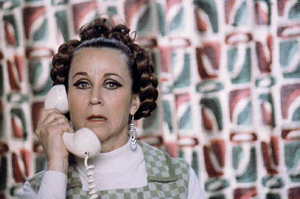 No doubt there are moments in the film that presage Almodóvar’s melodramatic masterworks that were yet to come. Most notably, and in the film’s most direct homage to Johnny Guitar, the viewer sees Ivan dubbing Sterling Hayden while sharing the frame with Joan Crawford’s silent projected image. Later, we see Pepa, alone on the soundstage, dubbing Crawford in the same scene. But this time Almodóvar focuses only on Maura’s face and her emotional reaction to Ivan’s earlier performance as it plays back in her headphones. Pepa and Ivan are speaking not only other character’s lines, but lines whose original emotional content has been eroded by both time and repetition. Yet, at the same time the lines are re-invested with meaning given that Ivan has abandoned Pepa. Almodóvar in this single scene makes a masterful argument for melodrama and its importance and power as a cinematic genre at a time when this was not a widely held view. The rehabilitation of melodrama would continue and expand not only in Almodóvar’s films but elsewhere in such work as Todd Haynes’ Far From Heaven.

Perhaps Mujeres is the cinematic equivalent of Verdi’s Nabucco – an early important work that was eventually followed by a largely uninterrupted string of masterpieces: the underrated Carne trémula, followed by Todo sobre me madre, Hable con ella, La mala educación, and now Volver. If Verdi’s career is in fact the template for Almodóvar’s, and his own Aida, Otello and Falstaff are yet to come, Viva Pedro indeed. 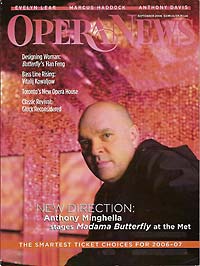 This week I opened up my mail to the latest Opera News or as I like to think of it - The Metropolitan Opera Guild’s Monthly Advertising Supplement. Oh, don’t get me wrong – I'm glad to get it. However, seeing this month's cover brought on that opera-is-definitely-dying-now feeling. I mean, with a new American opera season about to begin across the country and this being the issue with “The Smartest Ticket Choices for 2006-2007” - the editors felt the best lead was a feature on the Met’s opening Butterfly?

Apparently the state of opera is such that a “smart” ticket permits one access to an essentially borrowed production of an over-preformed piece marshaled by a down-on-his-luck-in-Hollywood director who brings that missing Amsterdam brothel ambience to early 20th Century Japan. Just what the doctor ordered for a gala season opener.

Sure, the Guild has every right to push this season’s product in their own advertising supplement. And god bless ‘em if Minghella’s uncanny Billy-Corrigan-circa-’95 look fills those seats. But am I the only one who finds the accompanying article’s spin that this somewhat retooled affair is supposedly now a “co-production” or that (even more patronizingly) its ENO predecessor was an “out-of town” opening a bit strange?

Now I’ll admit my bias. Butterfly is easily my least favorite of the major works in the repertoire. I could probably sit through every half-baked Figaro from here ‘till – well, whenever - before sitting through Butterfly again. Nonetheless, I don’t think the heavy advertising and suggested importance of this production is a good omen for a healthy art. I could go on but I think I’ve ranted enough for now.


Partly as an excuse to have more graphics on my page, and partly to express my counting/numbering habit, I'm including a rotating list feature on my page called "On Top" that will feature different themes every so often when I get around to them. I decided to get started with a "Get to Know Me" set.


What this blog is -
This blog will focus mostly on my opinions and thoughts about performances I see both here in LA and around other parts of the USA and the world as I see fit. It will focus mostly on classical music, opera, theater, art, movies, and recordings but may include a smattering of other things along the way.

What this blog is not –
This is not about news or traditional reviews. I will write about events when I get around to seeing them since I am not a fan of either opening or closing nights. This site is not about gossip, hero worship, or trivia. While I may have reflections on some recent arts events, it is not about reportage. Neither is this blog primarily about my personal life, friends, pets, politics, creative photography or travel plans. While this may be funny on some occasions, it is not intentionally so.

Please be aware that I am not a music professional nor an expert on these topics in any way. I like to think of myself as an informed observer but there are certainly those that would beg to differ.

That should cover it. I intend to write regularly and I hope that others find something here they like along the way.

Welcome to Out West Arts


Everyone starts somewhere and I start here (blogging that is). I started this blog for many reasons and here are a few:

1) I love the preforming arts. I especially love opera, classical music, and theater and I'm out more nights than not at some show, concert or other event. I have found over the last years that having a place to reflect on these experiences is worthwhile not only for my own thought process about these topics, but is a great way for me to have a record about my own history and thought process.

2) I believe I live in the most exciting arts community in America - Los Angeles - and I don't believe that anyone is doing a very good job of representing, reflecting or reporting on (mostly non-Hollywood) events out West. So I guess it's up to me.

3) While I think there are many great music and opera-oriented blogs out there - including The Rest is Noise and ionarts - I haven't found too many that suit my own personal interests and tastes so - if I want something done right...

So this is my reasoning for better or worse. More on the goal and content next time around. Hope you enjoy this as much as I do.